Over a century ago the Paolone family embarked on a treacherous voyage across the Atlantic from the old country to the new. Seeking the opportunity for a better life they arrived with only the clothes on their back and years of family tradition making wine and spirits passed down from generation to generation. After settling in British Columbia and working a traditional job, Stefano Paolone soon realized that wasn't the life he had imagined. A fist fight with his supervisor was the last straw, motivating Stefano to go back to his roots in the liquor industry. Soon after, the Paolone family found themselves running a local bar, hotel and back-room casino, known as “Canada Billiards.”

On July 1st, 1919, prohibition came to the United States, and many American communities found themselves dry. This created an opportunity for the Paolone family, because most of the whiskey and gin that entered eastern Washington came from southeastern British Columbia.

This area was known as the “Whiskey Gap” and rumrunners would cross it regularly to purchase Canadian alcohol and make the precarious trip back to Washington, intertwining the fate of the Paolone family and the liquor industry.

Fast forward decades later and Daniel Paolone and his friend Ian Jarvis are rekindling the family tradition … that is, the legal version of that tradition. Combining years of family knowledge with modern distillation equipment, they have handcrafted a variety of spirits using local ingredients found in British Columbia. 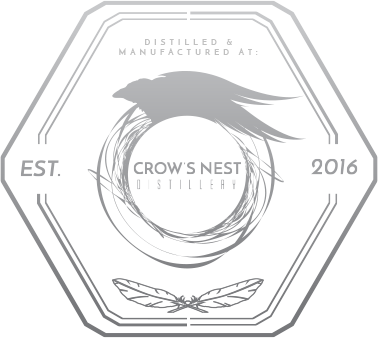 HISTORY BEHIND THE NAME

The company’s name, "Crow's Nest" is derived from the long, scenic highway that runs through BC and Alberta crossing through the Rocky Mountains. Known for its scenic views, a not very well known fact is the nefarious history of bootlegging that this very road played during prohibition.

During prohibition the Alberta Provincial Police setup checkpoints along the Crow’s Nest Pass, to prevent the flow of alcohol from BC to Alberta and then on to Montana and Washington. The police’s efforts had little effect on the traffic of alcohol and the industry flourished. The main culprit (ringleader) behind this flow of alcohol was Emilio Picariello. Picariello adopted a number of tactics to foil the police, which included loading his cars with sacks of flour with bottles of alcohol buried in them. He would also send two cars at once, the first a decoy and the second transporting alcohol. Then on September 21, 1922, a delivery went bad, which ended with Emilio’s son being shot and wounded. Emilio confronted the officer who shot his son, the situation escalated quickly into a gunfight and then a manhunt across central and southern Alberta for Emilio.